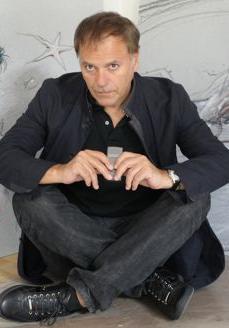 Enki Bilal (born October 7, 1951, Belgrade, Serbia). Born Enes Bilalović, to a Slovak mother and a Bosnian father who had been Josip Broz Tito's tailor, he moved to Paris at the age of 9. At age 14, he met René Goscinny and with his encouragement applied his talent to comics. He produced work for Goscinny's Franco-Belgian comics magazine Pilote in the 1970s, publishing his first story, Le Bal Maudit, in 1972. In 1975, Bilal began working with script writer Pierre Christin on a series of dark and surreal tales, resulting in the body of work titled Légendes d'Aujourd'hui. In 1983, Bilal was asked by film director Alain Resnais to collaborate on his film La vie est un roman, for which Bilal provided painted images that were incorporated in the "medieval" episodes of the film. He is best known for the Nikopol trilogy (La Foire aux immortels, La Femme piège and Froid Équateur), which took more than a decade to complete. Bilal wrote the script and did the artwork. The final chapter, Froid Équateur, was chosen book of the year by the magazine Lire and is acknowledged by the inventor of chess boxing, Iepe Rubingh as the inspiration for the sport. Quatre? (2007), the last book in the Hatzfeld tetralogy, deals with the breakup of Yugoslavia from a future viewpoint. The first installment came in 1998 in the shape of Le Sommeil du Monstre opening with the main character, Nike, remembering the war in a series of traumatic flashbacks. The third chapter of the tetralogy is Rendez-vous à Paris (2006), which was the fifth best selling new comic of 2006, with 280,000 copies sold. His cinematic career was revived with the expensive Immortel, his first attempt to adapt his books to the screen. The film divided critics, some panning the use of CGI characters but others seeing it as a faithful reinterpretation of the books. On May 13, 2008 a video game based on the Nikopol trilogy was announced titled Nikopol: Secrets of the Immortals. Published in North America by Got Game Entertainment in August 2008, the game is a "point and click" adventure for the PC; however, the Lead Designer was Benoit Sokal and not Bilal himself, who was the art designer, along with Yoshitaka Amano, for the video game Beyond Good and Evil 2. In 2012, Bilal was featured in a solo exhibition at The Louvre. The exhibition, titled "The Ghosts of the Louvre", ran from December 20, 2012 to March 18, 2013. The exhibition was organized by Fabrice Douar, and featured a series of paintings of "Ghosts", done atop photographs that Bilal took of the Louvre's collection.