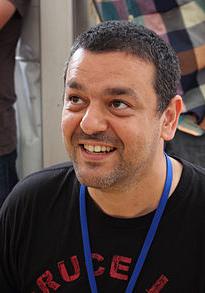 Joann Sfar (French: [ʒoan sfaʁ]; born 28 August 1971) is a French comics artist, comic book creator, novelist, and film director. Sfar was born in Nice, the son of Lilou, a pop singer, who died when he was three, and André Sfar, a lawyer well known for prosecuting Neo-Nazis. As a result of his mother's early death, Sfar was raised by his father and maternal grandfather, a military doctor of Ukrainian origin in the Alsace-Lorraine Independent Brigade (France) during World War II. Sfar's grandfather reportedly saved the right hand of the brigade's leader, novelist André Malraux, for which he was awarded French citizenship. A wildly prolific artist, he is considered one of the most important artists of the new wave of Franco-Belgian comics, though he has rejected the assertion that he, along with artists like Christophe Blain, Marjane Satrapi, and Lewis Trondheim, sought to create an alternative scene or a new movement in comics. Many of his comics were published by L'Association which was founded in 1990 by Jean-Christophe Menu and six other artists. He also worked together with many of the group's main artists, e.g. David B. and Lewis Trondheim. The Donjon series which he created with Trondheim has a cult following in many countries. Some of his comics are inspired by his Jewish heritage. Sfar is the son of Jewish parents (an Ashkenazi mother whose family was from Ukraine and a Sephardic father from Algeria). He himself says that there is Ashkenazi humor in his Professeur Bell series (loosely based on Joseph Bell), whereas Le chat du rabbin is clearly inspired by his Sephardic side. Les olives noires is a series about a Jewish child in Israel at the time of Jesus. Like Le chat du rabbin, the series contains a lot of historical and theological information. His main influences are Fred and André Franquin as well as Marc Chagall, Chaim Soutine, Will Eisner, Hugo Pratt and John Buscema. From 2009 to 2010, Sfar wrote and directed Gainsbourg: Vie Héroïque, a biopic of the illustrious French songwriter and singer, of whom Sfar is a self-confessed fanatic. The film, which draws substantially on Sfar's abilities as a comic book artist through its extensive use of fantasy artwork, animation and puppetry, was released in 2010 to general critical acclaim. Sfar's book L’Eternel has been adapted for a live action drama entitled Monsters’ Shrink by Canal plus.