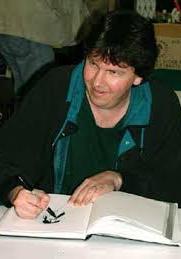 Sam Kieth (born January 11, 1963) is an American comics artist and writer, best known as the creator of The Maxx and Zero Girl.Kieth first came to prominence in 1984 as the inker of Matt Wagner's Mage, and a year later as the inker of Fish Police. In 1989, he penciled the first five issues (the "Preludes & Nocturnes" story arc) of writer Neil Gaiman's celebrated series The Sandman and collaborated with Alan Grant on a Penguin story in Secret Origins Special #1.He illustrated two volumes of writer William Messner-Loebs' Epicurus the Sage, drew an Aliens miniseries for Dark Horse Comics, and drew The Incredible Hulk #368, which led to drawing numerous covers for Marvel Comics Presents. In 1993, Kieth left Marvel to create the original series The Maxx for fledgling publisher Image Comics. The Maxx ran 35 issues, all of which were plotted and illustrated by Kieth. William Messner-Loebs scripted #1–15 and Alan Moore wrote #21. In 1995, The Maxx was adapted as part of MTV's short-lived animation series MTV's Oddities, which included Eric Fogel's The Head. After taking a break from comics to pursue other interests, Kieth created the series Zero Girl for DC Comics' Wildstorm imprint in 2001. He followed that with the drama Four Women later that year and Zero Girl: Full Circle in 2003. In August 2004, he launched the Scratch series featuring a teenage werewolf.Kieth then wrote and drew the five-issue series Batman: Secrets, featuring the Joker, and Batman/Lobo: Deadly Serious, a two-issue miniseries starting in August 2007. This was followed by 2009's Lobo: Highway to Hell, written by Scott Ian of the band Anthrax, and the painted story "Ghosts", which appeared in Batman Confidential #40-43. In 2010, Kieth wrote and illustrated the original hardcover graphic novel Arkham Asylum: Madness, which spent two weeks on The New York Times Best Seller list, reaching number five in the category of "Hardcover Graphic Books".Ojo comprises the first, and My Inner Bimbo the second, in a cycle of original limited series or graphic novels to be published by Oni Press, which he has dubbed "The Trout-a-Verse". The cycle will concern the intertwined lives of Annie (Ojo), Lo (My Inner Bimbo),Dana, Nola, Otto, and others all connected by an encounter with an urban legend known as the Magic Trout.In the UK, he has contributed to 2000 AD's Judge Dredd and provided several covers for the Nemesis the Warlock reprint title. In 2011, Kieth began drawing IDW Publishing's 30 Days of Night series. IDW released the 48-page The Sam Kieth Sketchbooks: Vol. 1, followed by a second volume in August 2010.