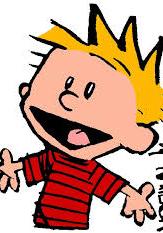 Calvin is the hyperactive, full-of-imagination, against-all-rules six-years-old kid that no/anybody would have. He loves dinosaurs and repulsive bugs, making horrifying icemen sculpture and full-lived capitalism. Calvin is rarely in the real world; he prefers the magic, fantastic world that he creates on his own, with his tiger Hobbes. His parents love him, but he makes it hard for them to do it, time to time. He has a conflictual love/hate relationship the Susy, his neighbour, and a conflictual (just of hate) relation with Rosalyn, the terrible babysitter.