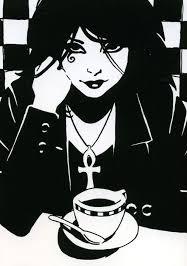 Death is a fictional character from the DC comic book series, The Sandman (1989–1996). The character first appeared in The Sandman vol. 2, #8 (August 1989), and was created by Neil Gaiman and Mike Dringenberg. In the stories, Death is both the end of life and a psychopomp. Like most anthropomorphic personifications of death, Death meets with the recently deceased and guides them into their new existence. However, unlike most personifications of death, she also visits people as they are born, according to Destruction in the Sandman Special: The Song of Orpheus. Evidently, only she seems to remember these encounters. In the special issue, it is also revealed that Death was known in Ancient Greece as Teleute. Physically, Death is also opposite to the traditional western culture personification of death (see Grim Reaper). In The Sandman, Death instead appears as an attractive, pale young goth woman dressed in casual clothes — often a black top and jeans. She also wears a silver ankh on a chain around her neck, and has a marking similar to the eye of Horus around her right eye. She is pleasant, down-to-earth, perky, and has been a nurturing figure for both incarnations of Dream. This irony has helped make Death one of the most popular characters from Sandman. Death was named the fifteenth greatest comic book character by Empire Magazine.