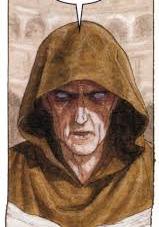 The oldest of the Endless, Destiny appears as a blind man dressed in grey or brown robes (purple in earlier comics), carrying a large book, the Cosmic Log. The book is chained to him, or he is chained to the book, and within the book is written the entire sum of existence, past, present and future. Destiny seems the most possessed by his function and responsibilities of any of the Endless. He rarely demonstrates much personality. His sigil is his book. His speech appears as a regular word balloon with letters in italics. In his garden are paths souls walk along as they fulfill their lives. Destiny is the only sibling who did not originate in The Sandman; he was created by Marv Wolfman and Bernie Wrightson for Weird Mystery Tales in 1972.