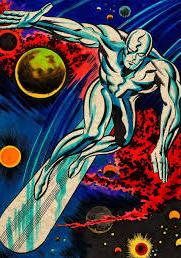 The Silver Surfer is a fictional superhero appearing in American comic books published by Marvel Comics. The character also appears in a number of movies, television, and video game adaptations. The character was created by Jack Kirby, and first appeared in the comic book Fantastic Four #48, published in 1966. The Silver Surfer is a humanoid with metallic skin who can travel through space with the aid of his surfboard-like craft. Originally a young astronomer named Norrin Radd on the planet Zenn-La, he saved his homeworld from the planet devourer, Galactus, by serving as his herald. Imbued in return with a tiny portion of Galactus's Power Cosmic, Radd acquired vast power, a new body and a surfboard-like craft on which he could travel faster than light. Now known as the Silver Surfer, Radd roamed the cosmos searching for planets for Galactus to consume. When his travels took him to Earth, he met the Fantastic Four, a team of powerful superheroes who helped him rediscover his humanity and nobility of spirit. Betraying Galactus, the Surfer saved Earth but was exiled there as punishment.In 2011, IGN ranked Silver Surfer 41st in its "Top 100 Comic Heroes" list. He was portrayed by Doug Jones and voiced by Laurence Fishburne in the 2007 film Fantastic Four: Rise of the Silver Surfer.