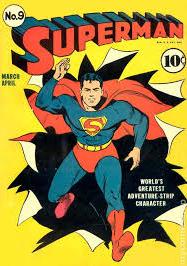 Superman is a fictional superhero appearing in American comic books published by DC Comics. The character was created by writer Jerry Siegel and artist Joe Shuster, high school students living in Cleveland, Ohio, in 1933. They sold Superman to Detective Comics, the future DC Comics, in 1938. Superman debuted in Action Comics #1 (cover-dated June 1938) and subsequently appeared in various radio serials, newspaper strips, television programs, films, and video games. With this success, Superman helped to create the superhero archetype and establish its primacy within the American comic book. The character is also referred to by such epithets as the Big Blue Boy Scout, the Man of Steel, the Man of Tomorrow, and the Last Son of Krypton. The origin story of Superman relates that he was born Kal-El on the planet Krypton, before being rocketed to Earth as an infant by his scientist father Jor-El, moments before Krypton's destruction. Discovered and adopted by a farm couple from Kansas, the child is raised as Clark Kent and imbued with a strong moral compass. Early in his childhood, he displays various superhuman abilities, which, upon reaching maturity, he resolves to use for the benefit of humanity through a "Superman" identity. Superman resides and operates in the fictional American city of Metropolis. As Clark Kent, he is a journalist for the Daily Planet, a Metropolis newspaper. Superman's love interest is Lois Lane, and his archenemy is the supervillain Lex Luthor. A close ally of Batman and Wonder Woman, he is typically depicted as a member of the Justice League. Like other characters in the DC Universe, several alternative versions of Superman have been characterized over the years. Superman's appearance is distinctive and iconic; he usually wears a blue costume with a red-and-yellow emblem on the chest, consisting of the letter S in a shield shape, and a red cape. This shield is used in many media to symbolize the character. Superman is widely considered an American cultural icon. He has fascinated scholars, with cultural theorists, commentators, and critics alike exploring the character's role and impact in the United States and worldwide. The character's ownership has often been the subject of dispute, with Siegel and Shuster twice suing for the return of rights. He has been portrayed in many adaptations of the comics as well, including films, television series, and video games. Several actors have played Superman in motion pictures and TV series including Bud Collyer, Kirk Alyn, George Reeves, Christopher Reeve, Dean Cain, Tim Daly, Tom Welling, Brandon Routh, Henry Cavill, and Tyler Hoechlin.